“Magic mushrooms” with hallucinogenic effects have given fungi a bad rap since the hippie era of the 1960’s.

However, the real magic of the humble fungi family is that they represent some of nature’s most potent botanical healing weapons — and a natural way to boost the immune system.

The use of medicinal mushrooms dates back to at least the 3rd millennium B.C. The same compounds fungi use to protect themselves from invaders also help fight many human health problems. So much so that some of today’s scientific experts hail the mushroom as a “medical miracle.”

In this article, you’ll see how five of the more important medicinal mushrooms can help boost your immune system naturally and defend against many health conditions — especially those related to aging.

Medicinal Mushrooms and the Immune System

Back in the 1980’s, Harvard scientists discovered that specific compounds within mushrooms could stimulate specific cells in the immune system.  They observed the immune-boosting properties of a certain component of medicinal mushrooms called beta glucan.

Molecules of beta glucan possess a “lock and key” relationship with the receptors of special immune cells called macrophages. Like the Pacman in the 1980’s maze arcade game, macrophages go around engulfing anything your body identifies as a harmful pathogen — viruses, bacteria, and other microorganisms.

Beta glucan molecules inside mushrooms stimulate macrophage activity by attaching to the surface of macrophage cells and basically acting as fuel to keep them going strong.

Continued research has found that beta glucan can also boost the response of other immune system cells, such as natural killer  (NK) cells, lymphocytes, and neutrophils.

Beta glucans are one of hundreds of potentially healing compounds in mushrooms.

A number of mushrooms from around the world have been researched for their benefits. Here are five of the most well-known and well-studied medicinal mushrooms: 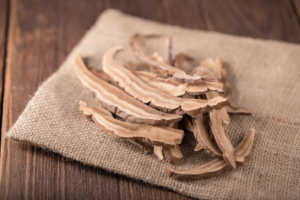 Many centuries ago, ancient Asian healers discovered that Reishi could promote health and longevity. For these reasons, Reishi has historically been referred to as the “mushroom of immortality.”

Modern science, with the benefit of advanced technology, has found that Reishi mushrooms can help protect against the negative effects of aging and defend the immune system.

With advancing age, immune function declines. This weakening of the immune system basically opens the door to infection by bacteria, viruses, and other pathogens.

Additionally, aging causes the body to lose its ability to turn off the inflammatory response once threats are eliminated. Out-of-control inflammation is now considered by most health experts to be at the root of many chronic diseases of aging.

When it comes to Reishi, research has shown it possesses broad-reaching benefits, including immunomodulation. Reishi mushroom defends immune function through its effects on various white blood cells, including natural killer (NK) cells, as well as B and T lymphocytes.

In addition to its overall immune-enhancing benefits, research suggests Reishi also acts in these ways: 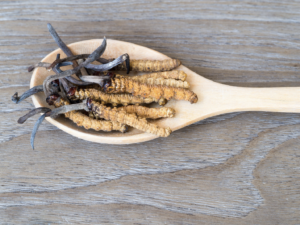 The Japanese name for Maitake is “dancing mushroom.” It is a prominent component of Asian cuisine.

In the United States, Maitake is called “hen of the woods” because it grows in the shape of a fluffed-up chicken. These mushrooms are so prized, the location of maitake patches in the wild is often kept as a family secret passed down through generations.

As with Reishi, the key compound in Maitake is beta glucan, which enhances the action of macrophages and helps the immune system produce more natural killer (NK) cells that seek out and destroy abnormal or mutated cells. When beta glucan from Maitake enters the system, it signals the presence of a threat so the body and immune system can defend itself.

A 2010 study reported in Experimental & Molecular Medicine, found that Maitake helped reduce inflammation in the bowel by suppressing the production of pro-inflammatory chemicals.

Instead of just boosting the immune system, Maitake helps restore balance to the immune system, stimulating when necessary and suppressing when called for. Maitake is regarded as one of the best mushrooms for natural overall health support.

#3: The Cordyceps Mushroom — a Staple of Ancient Tibetan Healing

The Cordyceps mushroom (Cordyceps sinensis) is a staple of traditional Tibetan medicine. Found in the high mountains of Tibet, Nepal, and China, Cordyceps is called the “caterpillar fungus” because it derives some of its nutrients from caterpillars.

Multiple compounds in cordyceps (including cordycepin and polysaccharides) have been shown to:

Increasing evidence shows that cordyceps is a bidirectional immune modulator. This means it can either escalate or suppress immune system function by regulating innate and adaptive immunity.

Innate immunity is your body’s first line of defense against attack. It is immediate but non-specific, and involves natural killer cells, macrophages, and others. The second line of defense, adaptive immunity, is specific to the pathogen in question. It takes longer to get started but has a more long-lasting response. Adaptive immune cells include T and B lymphocytes.

#4: Shiitake — the Queen of Mushrooms for Natural Immune Defense

Shiitake mushroom gets its name from the Japanese chestnut tree or ‘shiia’. Scientifically known as Lentinula edodes, it grows wild in Asia and is commercially produced in America. Shiitake, known as the “queen of mushrooms,” is one of the most popular mushrooms for both culinary and medicinal uses.

A 2015 University of Florida study of healthy adults found that eating one Shiitake mushroom a day improved immunity and reduced inflammation.

In addition to its immune-enhancing effects, Shiitake has also been studied for anti-aging effects, helping the body rid itself of abnormal cells, oral health, and support for cardiovascular health.

The fifth mushroom we’ll discuss in this article with immune-boosting effects is Coriolus versicolor, called the “Turkey Tail” mushroom in North America due to its striking colors.

Ancient Chinese formulations of this mushroom have traditionally been used to promote strength, health, and longevity.

Coriolus versicolor is a widely studied mushroom — with hundreds of research trials demonstrating its significant benefits.

This mushroom contains an array of antioxidants that defend immune health by regulating inflammation and stimulating the release of protective compounds.

Also found in this mushroom are immune-boosting carbohydrate molecules called PSK and PSP for short. Emerging research suggests that they increase and activate several specialized immune cells, naturally strengthen the immune system, and inhibit the growth of abnormal cells.

In the wild, habitat loss has threatened the natural yield of many of these mushrooms. That’s why many are grown commercially for research and use in supplements and extracts. Using extracts and supplements containing medicinal mushrooms is also a more precise way to gain their beneficial compounds.

Mushroom extracts for immune defense are generally regarded as safe and non-toxic, but they should be used with caution by people taking immunosuppressive drugs.

Backed by thousands of years of use by ancient healers, modern science now recognizes the powerful health benefits of medicinal mushrooms.  In fact, mushrooms contain a “virtual pharmacy’ with a broad array of bioactive compounds. In your quest to defend your health — particularly your immune health — consider integrating the mighty “magic” mushroom into your own personal healthcare regimen.

Note: This article is not intended to constitute medical advice. Any actions should be done in consultation with your physician.